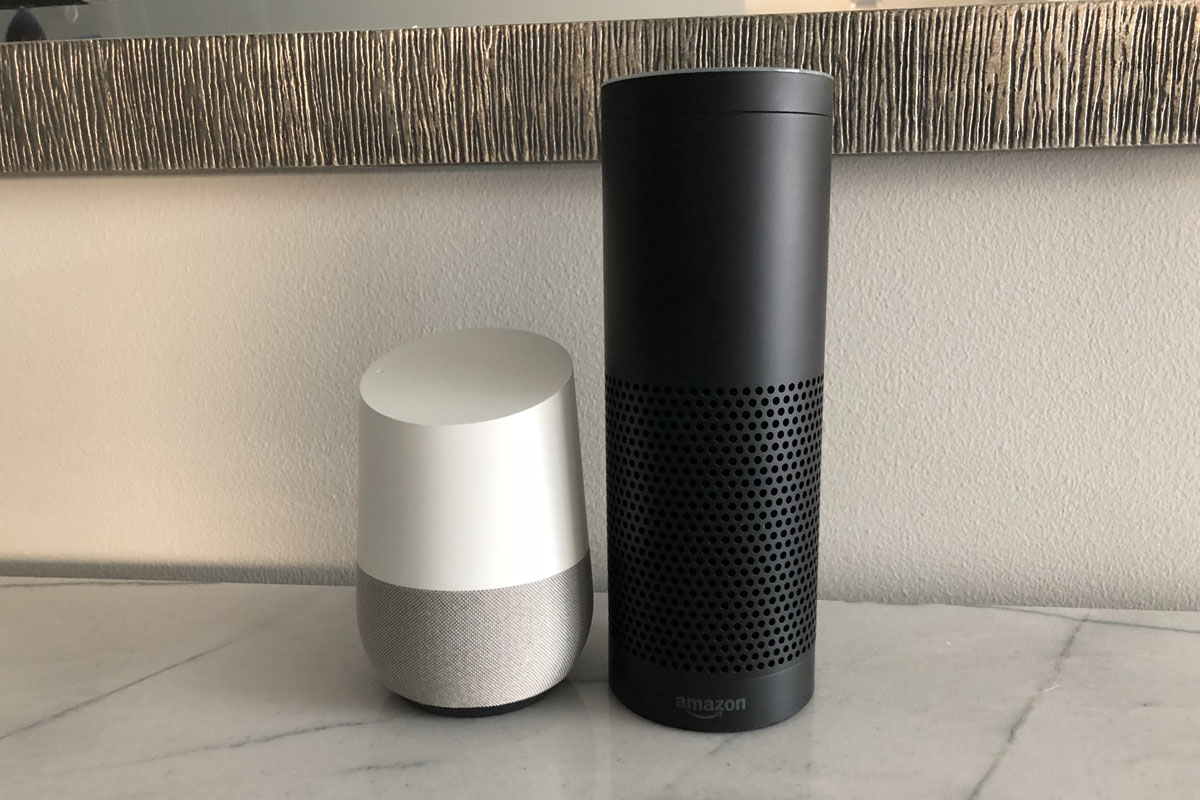 At Dashbot, we are strong believers in conversational interfaces – especially voice. Conversation is the natural way humans communicate – and it’s the future of human computer interaction. As we have mentioned before, if you remember the videos of two-year-olds swiping on iPhones and iPads, the same thing is happening with devices like Alexa and Google Home – kids already know how to interact.

Last year, we conducted a survey of Alexa and Google Home users to better understand their behavior and satisfaction with the devices. 2017 was definitely the start of something big in voice. Interest in voice apps began to really take off with all types of enterprises and brands entering the space – media, CPG, retail, food delivery, banking, and a wide variety more.

This year, we re-ran the survey to see if, or how, users behaviors and feelings towards the devices may have changed in 2018. We also dove deeper into some of the interests based on demographics.

As we saw last year, voice assistant devices are quite behavior changing. Users use them throughout the day for a variety of use cases. 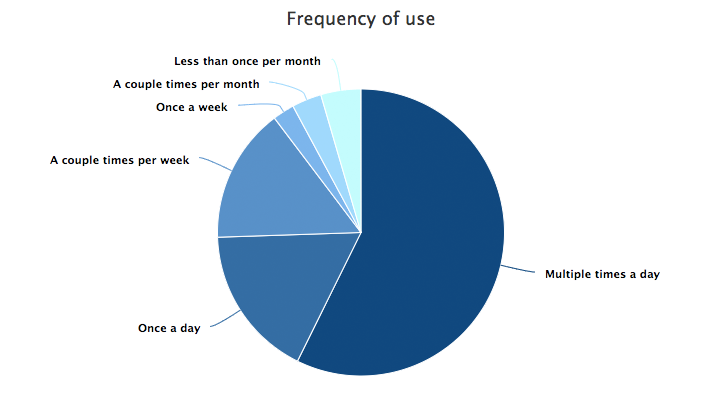 Nearly 75% of respondents use their voice devices at least once a day, with 57% using their device multiple times a day. These numbers are very similar to the results last year.

If we look closer at male versus female usage, approximately 64% of men and 53% of women use their devices multiple times a day. At the other end of the spectrum, women tend use the device less frequently with nearly 7% using the device less than once a month compared to 1.4% of men. 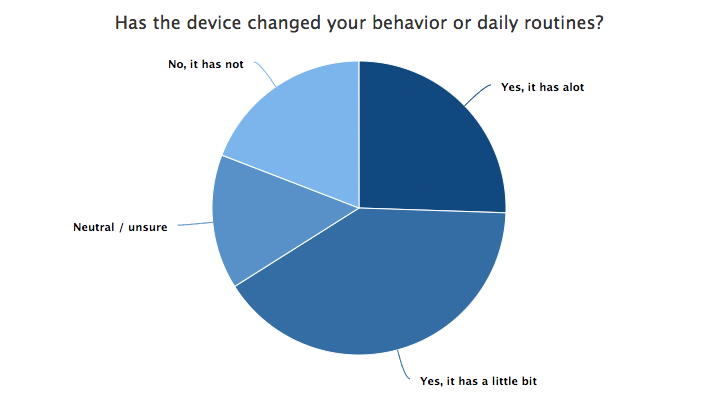 In fact, in respondents own words they describe how much they rely on the device, how integrated it is in their life, and how surprised they are by how much they use the device.

As voice assistants become more ubiquitous, and the technology is embedded in even more types of devices, we imagine the behavior changing aspect will increase significantly. If you are a heavy Alexa or Google Home user, how often have you been traveling and catch yourself about to talk to the device in your hotel room, when it’s not there? Amazon and Google are working on this though through their business initiatives to provide devices in hotels and other locations. 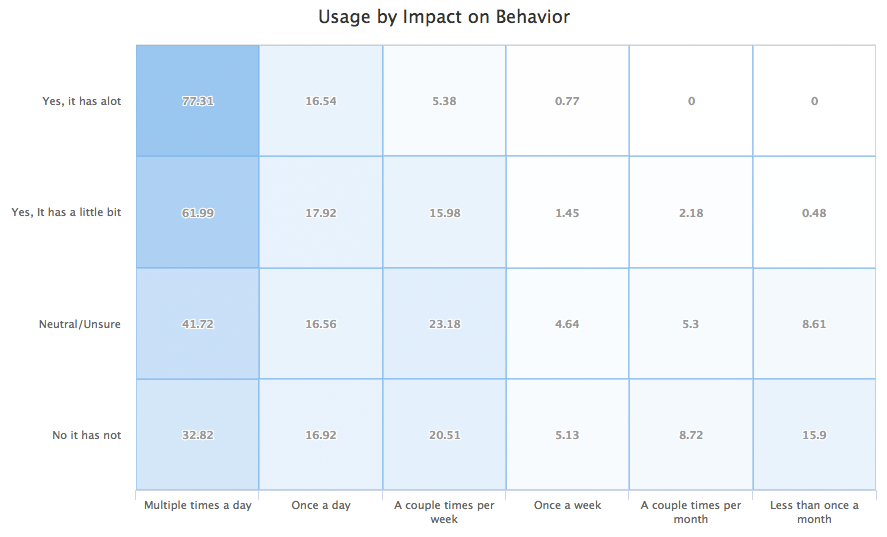 Core features are the most frequently used

We asked respondents what features they use most frequently.

It turns out, listening to music, checking weather, and asking for information, are the most common use cases. They’re also core functionality of the devices. Using specific third party skills is less common, which we will explore later in the report. 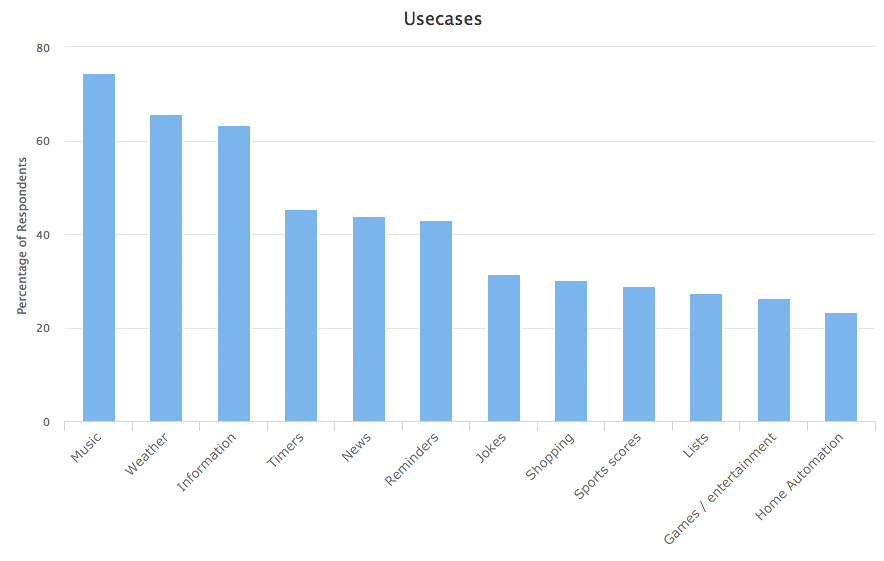 Approximately 75% of respondents use the device to listen to music, 66% check the weather, and 63% ask for information.

If we look at the usage based on gender, interesting differences emerge. 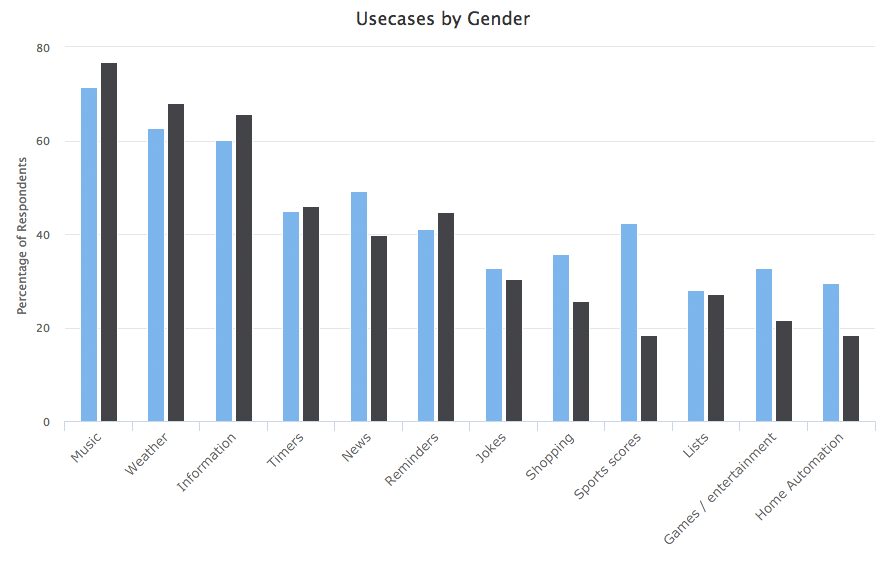 While the top three use cases are the same for both male and female, women tend to have slightly higher usage for each – roughly 5-6% higher. For example, nearly 77% of women listen to music while 71% of men do.

Speaking of shopping, we took a closer look at this usecase.

Users are willing to make purchases through their devices

Both Alexa and Google enable users to make purchases through their own e-commerce services, and with the addition of account linking, other retailers and services. Developers and brands can also monetize their voice apps through subscriptions and “in-app” purchases.

We asked respondents whether they have ever made a purchase through their voice assistant. It turns out 43% of respondents have, including 58% of men and 32% of women. 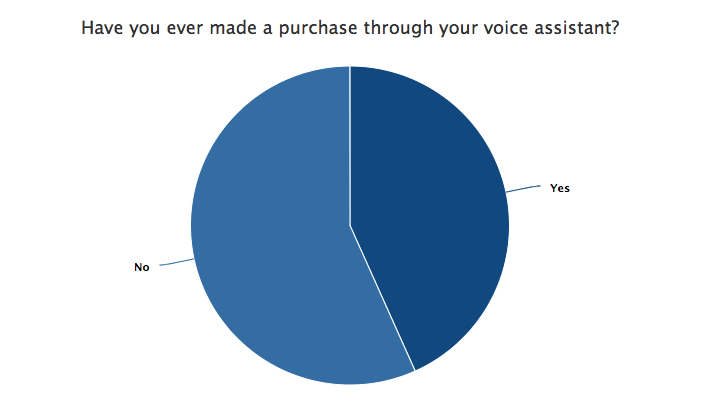 In regards to what respondents are purchasing, products from the providers own e-commerce service (Amazon or Google Shopping) are the most common at nearly 83%. 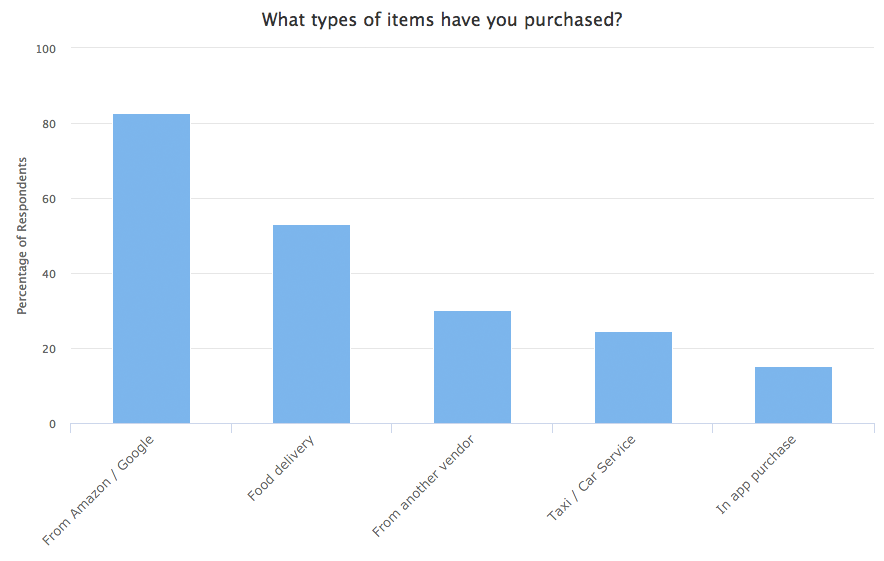 Interestingly, food delivery is also fairly common at 53%. The “reorder” case, i.e. the ability to reorder the same items as the previous order, works quite well through these interfaces, as it can be done in more shorter, concise statements than complex menu ordering. We’ve also heard from many food delivery services that reordering is quite common – consumers tend to order the same thing each time.

Discovery of third party voice apps is still an issue 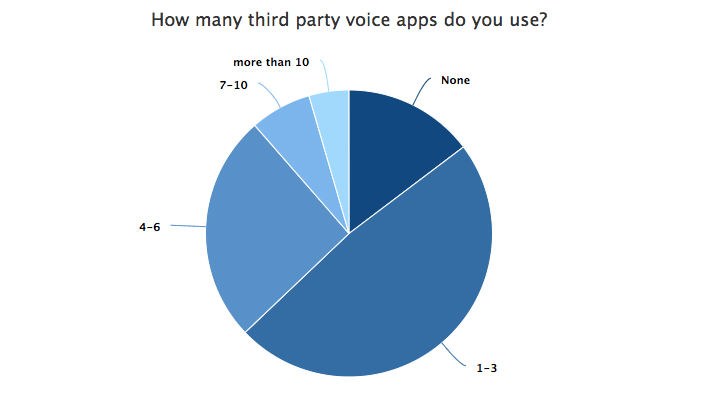 The good news is consumers are using third party skills, they just may be using a small number of them. Based on the survey, 48% of respondents use between one and three voice apps, and an additional 26% use between four and six. Only about 15% of respondents said they did not use any.

We asked respondents what their favorite voice apps are. Perhaps not surprisingly, the more common responses were the native features – listening to music, checking weather, and getting info. The more common third party apps named though include Pandora, Spotify, Uber, and Jeopardy.

Both discovery and user acquisition are challenges.

As we mentioned in our last survey, we found respondents often did not even know what the third party voice apps were called. 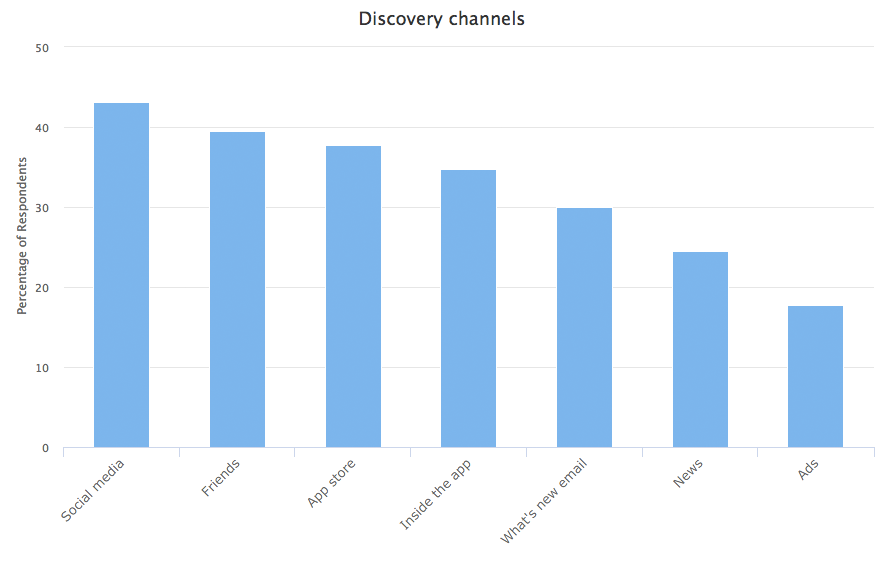 The most common ways users find out about Skills and Actions are through social media, friends, and the device app stores.

We often hear from brands and developers that social media, either paid or organic, is one of the best channels for user acquisition for voice apps. According to the survey, over 43% of respondents found skills through social media. Viral video influencer campaigns are also recommended as they serve two purposes – reach through the influencer, and instruction on how to interact with the voice app. Since it’s a new space and new user interface, users may not know what they can say to, or do with, the particular voice app.

The platforms are trying to improve discovery.

With Alexa, users can ask the device for the latest skills or recommendations, even within categories. The device will walk through a set of Skills, listing the name, and asking if the user wants to install or continue.

In addition, Alexa supports a “can fulfill intent” that developers and brands can implement to help users discover their voice apps. For example, if an Alexa Skill can support ordering a pizza, the developer can list that as a “can fulfill” intent and potentially be recommended by the device when a user asks to order a pizza.

Google Home does not yet appear to have a searchable directory via voice. Asking the device for the latest actions, or recommended actions, results in either the fallback “I don’t understand” type of response, or attempts to provide some form of definition depending on the request – e.g. describing a “sports action” when asking for the latest “sports Actions.”

Users tend to be quite satisfied with their voice devices and recommend them highly.

We asked respondents how satisfied they are with the device’s ability to understand, the device response, and the overall experience. The results are quite positive. 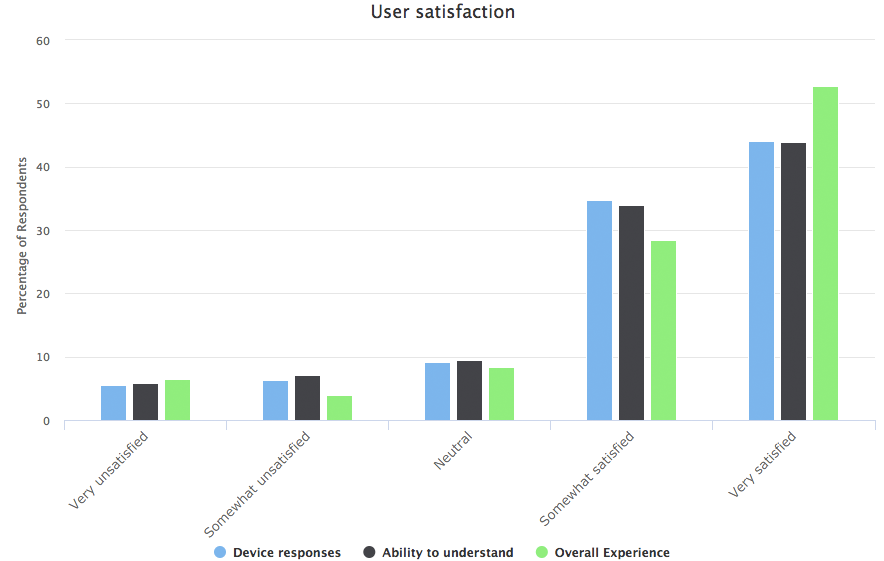 In regards to the device’s ability to understand, nearly 44% of respondents were very satisfied, and an additional 34% were somewhat satisfied. Only about 13% were either somewhat, or very, unsatisfied.

Similarly, in regards to the device reponses, 44% of respondents were very satisfied, and an additional 35% were somewhat satisfied. Only about 12% were either somewhat, or very, unsatisfied.

Based on the overall experience, 53% of respondents were very satisfied and an additional 29% were at least somewhat satisfied. Only 10% were either somewhat, or very, unsatisfied.
In addition, we asked respondents if there was anything about the device that surprised them, and the results also indicate a high level of satisfaction. Owners were surprised by how much the device can do and how knowledgeable the devices are. They mentioned the ease of use, the ability of the device to understand, and how quick and accurate the responses are. Another interesting, and fairly common, comment was how quickly the device updates itself – “every day something new” and “like Christmas everyday.”

Owners are quite happy with their devices and would happily recommend them. When asked how they would rate the device overall on a one to five star scale, the respondents’ average rating was 4.4 stars.

When asked to rate how likely they are to recommend the device to others on a one to five scale, the respondents rated 4.4 as well.

We asked respondents if anything surprised them about the devices and the more common responses were:

While most of the comments were generally positive, there were a small number of complaints. The biggest complaint, while still a very small number compared to all the positive responses, was the frustration with the device’s ability to understand a user’s request.

Overall, owners of Alexa and Google Home devices are very happy with their devices. They are pleasantly surprised by all the things the devices can do, how smart the devices are, and how reliant they have become on the devices.

While the voice assistant space is still relatively new, there is an opportunity for brands to monetize as there is a strong indication of willingness to make purchases through the devices. As more brands develop voice apps, it will be interesting to see what usecases they support – how they take advantage of the voice interface and whether they implement monetization opportunities.

As many of the respondents mentioned, the devices are continuously getting better – not just in the ability to understand, but in all the functionality provided.

We continue to be bullish on this space and look forward to seeing what the future holds.